We would like to share a sentimental moment with you. We want to bring you back to the time when Toa Payoh was just another swamp, till the time it had developed into a much sought-after estate. This poem, appropriately titled "A Brief History of Toa Payoh", was penned by Mr. Koh Buck Song, a veteran reporter with the Straits Times. Preceding the 1960's the Marymount and Bishan East areas were used as a graveyard for the Cantonese. In 1964, building started to commence and by the late 1960's all graves were exhumed and cremated to allow for future housing and commercial development. The Thomson area is one of the oldest of the five communities. It was a farming/agricultural community and rubber plantation prior to the PAP. One of the oldest facilities is the Shin Min School which was built just after WWII.

Thomson Road which is one of the oldest roads in the area was named after JT Thomson who designed and built it.

Additional background information came from "The Singapore House" by Lee Kip Lin (Times Edition, 1983) which gives some reference to the area in the nineteenth century. The following information has been derived from this source.

In the early 1800's there were only scattered Malay settlements within the Serangoon area. It was not until the mid 1830's that Joseph Balestier, the American consul, speculated in sugar planting in Serangoon. About 1,000 acres between existing Balestier Road and the Kallang River were planted with sugar cane. When sugar prices fell in the late 1840's the plantation was abandoned.

In the Thomson area there were also a few kampongs and scattered compounds during the 1800's. Thomson was named after John Turnbull Thomson the government surveyor of maps from 1841 to 1853. 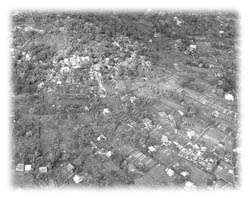 In the 1920s, there was a vast stretch of swampy land dotted with fish ponds, vegetable farms and huts. This piece of rural vegetable farm land was known as Toa Payoh. Back then, agriculture was the main source of living for the population of 300.

By 1960, the population in Toa Payoh grew to about 10,000. However, the lifestyle remain unchanged. In 1964, the Housing & Development Board (HDB) began its massive project to develop Toa Payoh into a planned satellite town. The entire project was estimated to cost 150 million dollars, with 35,000 low cost, high rise public housing units to house 250,000 of the population.

In 1969, the first batch of residents moved into Toa Payoh Town and, as the saying goes, the rest is history...

A Brief History of Toa Payoh

they say
there is no history
made in Toa Payoh,
that Economy, Polity, State
are major tenants
in Significance's estate

but this being,
whose amniotic fluids,
swamp and swill,
were channelled seaward
through monsoon drains,
instant rivers,
was once a brave new world
of giant pigeonholes sky looking,
rigid under morning sun,
a pioneer in its time,
so should not earliness and vision
receive, as in Sentosa's museum,
decorum, grace
and privilege of place?

the pride and self-sufficiency
of early settlers
eclipsed:
town centre, bus terminal, the first SEAP Games,
the emporium's sacks of fragrant rice,
children's playgrounds, the garden's lake and town,
the Queen's lookout
excite no more
and the children of Toa Payoh
are the mothers and fathers
of Woodlands, Pasir Ris,
distant orbits of the new satellites

this town delivered so fast,
labour pains
now claim a second strike:
this time, cranes and the wrecker's ball
strip the old town
colonise once more
this, one of Modernisation's
first ports of call

in our History's eye,
growth is so swift
rebirth also
gets short shrift